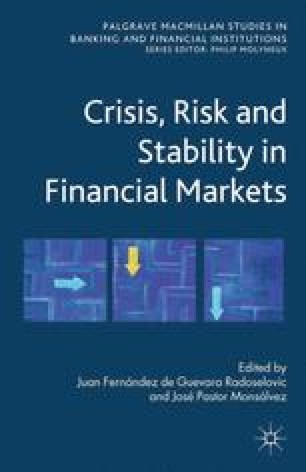 Crisis, Risk and Stability in Financial Markets pp 1-7 | Cite as

The current crisis has taught us the key role the financial sector plays in developed economies. Once the financial crisis had exploded in 2007 and 2008, its consequences spread rapidly to the rest of the economy, causing many economies around the world to enter one of the worst recessions since the 1929 crash and the Great Depression of the 1930s. The financial turmoil that began in the summer of 2007 and the subsequent financial crisis that started in the summer of 2008 has led financial markets to witness a dramatic decline in their activity. According to the World Federation of Exchanges, world market capitalization reduced in 2008 by 46.5 per cent in a single year, the New York Stock Exchange fell by 41 per cent, Nasdaq by 40.3 per cent, NyseEuronext (Europe) by 48 per cent, the Nasdaq OMX Nordic Exchange by 52 per cent, the London Stock Exchange by 33 per cent and the Deutsche SE by 45 per cent. At the same time, market values plunged and public debt markets became refuge markets during the peak of the crisis, but later on, in 2010, the contagion of the crisis also spread to the sovereign debt markets, especially in Europe. Banking activity also fell; bank credit plunged in the most developed countries as financial institutions were forced to restructure their balance sheets due to either exposure to toxic assets, or excessive concentration in real estate markets, or both. The European Union authorities were forced to increase deposit insurance to prevent bank runs. Also, public intervention in Europe was needed — and still is — to recapitalize numerous banks.

Real Estate Market Current Crisis Liquidity Risk Interest Rate Risk London Stock Exchange
These keywords were added by machine and not by the authors. This process is experimental and the keywords may be updated as the learning algorithm improves.
This is a preview of subscription content, log in to check access.