Bureaucracy and the Alternatives in World Perspective 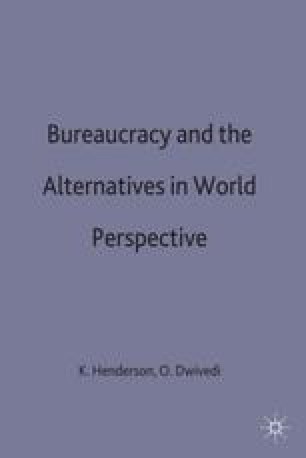 The search for alternative modes of service delivery has taken some unexpected turns, one of which is towards non-governmental organisations and grassroots initiatives as primary providers of the basic services normally associated with government: health, education, social welfare, shelter, emergency relief, agricultural assistance, rural credit, and others. Unlike privatisation and an expanded business sector, the ‘Third Sector’ is a less-discussed source of ongoing services. Northern NGOs were, until recently, thought of only as short-term providers of assistance or developmental catalysts. Southern NGOs and grassroots initiatives were frequently viewed as small-scale, fragmented efforts with little ability to become institutionalised, and were commonly regarded as a nuisance — if not a potential threat — by indigenous government administrators.

Host Government World Bank Group Peace Corps Grassroots Movement Rural Credit
These keywords were added by machine and not by the authors. This process is experimental and the keywords may be updated as the learning algorithm improves.
This is a preview of subscription content, log in to check access.