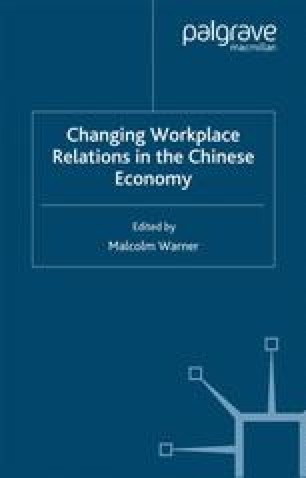 The Social Role of the Chinese State Enterprise

Historically, Chinese state enterprises have operated as semienclosed communities, more akin to the army than to firms in market economies (Walder, 1986). As well as producing goods or services for sale they have also provided either free or at low prices a wide range of services to their current and retired employees, and often to their families as well. Prominent amongst these have been housing, in-and out-patient medical treatment, schooling for children and (in some cases) even public utilities. The cash wage has traditionally been just one component of a package with array of benefits in kind (see Hu, 1996). The extended social role of Chinese state enterprises binds much of the urban labour force to their respective work units (danwei) for not merely their working lives but also retirement (Walder, 1986). This role is increasingly perceived as a major barrier in the restructuring of state enterprises, including the closure of the ones with a slim chance of survival. Besides, faced with a dramatic worsening of their financial position in recent years, many state enterprises have defaulted on their social obligations, such as pensions to their retirees, and have laid off their employees in large numbers. As result, the urban labour force no longer perceives employment in a state enterprise as a secure guarantee of income for life complemented with generous benefits in kind; it offers, in Chinese parlance, neither an ‘iron rice-bowl’ nor an ‘iron chair’ (see Chapter 2).

Unemployment Insurance Work Unit State Enterprise Wage Bill Labour Insurance
These keywords were added by machine and not by the authors. This process is experimental and the keywords may be updated as the learning algorithm improves.
This is a preview of subscription content, log in to check access.