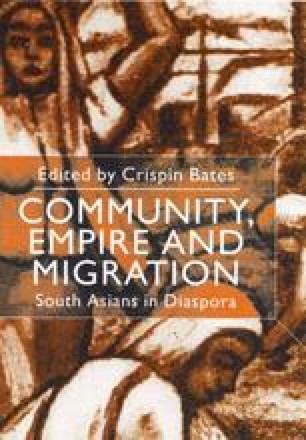 The Development of Communalism among East African Asians

The social and ritual exclusiveness of South Asian settlers and their offspring in East Africa has been stressed by a number of writers. None is more outspoken than Prem Bhatia, the journalist-turned-diplomat, in his account of the Indian Ordeal in Africa (1973). There, Bhatia suggests that Punjabis socialized more freely across caste and sect lines than more exclusive Gujaratis, accepting that rich Asians’ rudeness towards African leaders during his time as Indian High Commissioner to Kenya during the later 1960s (as in the account of the rich Asian shouting to him in Punjabi at an African politician’s party not to spend too much time with his host as he had provided the whisky on offer) was balanced by African politicians’ attacks upon poorer Asian shopkeepers in the same country, citizen and non-citizen alike. At the same time, Bhatia outlines the great diversity of Asian social groupings he encountered — Patels, Lohanas, Brahmins and Shahs among Gujarati Hindus; Jats, Ramgarhias and Nandlanis among Punjabi Sikhs; Ahmadiyas, Sunnis and Shias — further subdividing into the Aga Khan’s Ismailis, Ithn-Ashris and Bohras — among the Muslims; Christian Goans; and Parsis. All these South Asian communities had separate places of worship, sports and welfare facilities. This struck Bhatia as being unlikely to encourage greater social contacts with Africans, if the South Asians themselves were divided into such sharply competing communities.

British Colonial Slave Trade South Asian Community Oral Testimony British Official
These keywords were added by machine and not by the authors. This process is experimental and the keywords may be updated as the learning algorithm improves.
This is a preview of subscription content, log in to check access.