Foreign Capital Inflows to China, India and the Caribbean 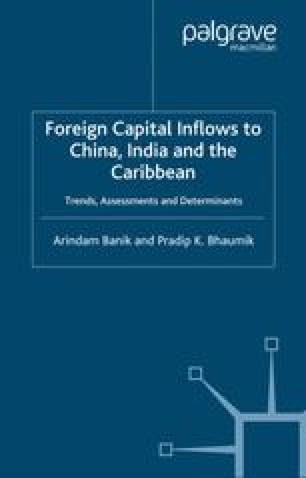 Foreign Capital Inflows to China, India and the Caribbean pp 7-22 | Cite as

The contribution of MNCs in transforming the global economy is now a widely acknowledged reality. Indeed, since the early 1980s there has been a resurgence of FDI, directed by MNCs into the economies of the developing world. The annual average FDI inflows around the globe was about US$310.9 billion during 1992–97 as compared to US$328.2 billion of outflows during the same period (Table 2.1). This trend in FDI inflows continued unabated, soaring to a record level of US$1388.7 billion in 2000. Figures 2.1 and 2.2 reveal the trends in FDI inflow and outflow for both developed and developing countries, respectively. Global FDI inflows were however, down by 41 per cent in 2001, and fell by another one-fifth in 2002 – to US$679 billion or just half the peak in 2000. It had declined further by 18 per cent (to US$560 billion) in 2003.

North American Free Trade Agreement Foreign Affiliate Cayman Island Outsource Business Process World Investment Report
These keywords were added by machine and not by the authors. This process is experimental and the keywords may be updated as the learning algorithm improves.
This is a preview of subscription content, log in to check access.