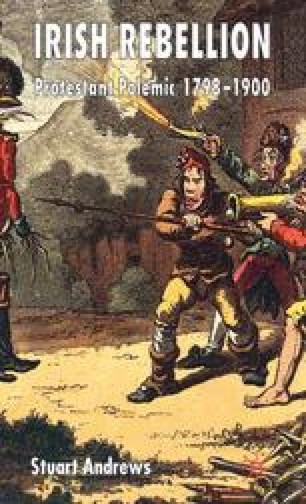 If early experience of the Union allowed the propagandist battle-lines of the 1790s to remain fixed a decade after the Act, the receding prospect of Catholic Emancipation ensured that the Protestant version of 1798 would become entrenched. From a modern perspective, it seems surprising that the 1798 Rebellion had not itself driven Emancipation from the political agenda. Yet in 1799 and 1800 the British Critic and the Antijacobin Review were both more concerned to combat English Protestant Dissenters — notably Unitarians — than the threat of Catholicism.1 In February 1801 the Antijacobin, reviewing a pamphlet by Thomas McKenna in favour of Emancipation, commended it as ‘a production containing much good sense and sound argument’. The short review does express surprise that ‘Mr McKenna has not noticed the objections so strongly urged by Dr Duigenan’, which have ‘led us to entertain very strong doubts, not merely as to the expediency, but as to the constitutional practicability of rendering Catholics eligible to seats in Parliament’. The editors nevertheless express themselves ‘open to conviction’, and prepared to ‘weigh the arguments that come before us on both sides with equal impartiality and attention’.2

Unitarian Commitment Monthly Review Religious Liberty Catholic Religion Notice Spread
These keywords were added by machine and not by the authors. This process is experimental and the keywords may be updated as the learning algorithm improves.
This is a preview of subscription content, log in to check access.