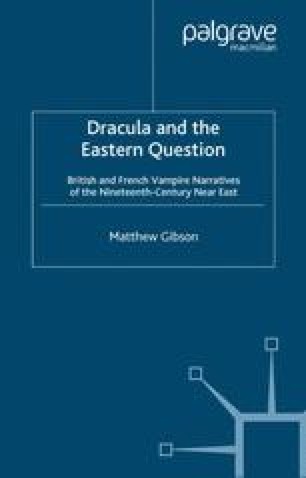 Dracula and the Eastern Question pp 1-14 | Cite as

In his amusing travel book of 1875, the mysteriously initialled R.H.R describes how he decided to relax after what he considered to have been one of the best meals of his life at the Russian consulate in Cattaro, Dalmatia: ‘I got another chair, and stretched my legs on it; the natives stared — no Oriental ever thinks of stretching his legs — the acme of comfort for him is to tuck them under him.’1 This distinction between an ‘Oriental’ and a Western custom is designed to show the exotic nature of his location — what can be more exotic than a difference of custom in a function which for most of us seems natural, not cultural? — but also to define the area in which the traveller finds himself: it is a part of the Orient, and he is amongst Orientals. Few people today would define the Dalmatian coast (now southern Croatia and Montenegro) as ‘Oriental’, although they would not hesitate, I should think, to describe it as ‘Balkan’, and a part of ‘Eastern Europe’.

Civil Society Political Society Hegemonic Discourse Exotic Nature Reverse Colonisation
These keywords were added by machine and not by the authors. This process is experimental and the keywords may be updated as the learning algorithm improves.
This is a preview of subscription content, log in to check access.

Cite this chapter as:
Gibson M. (2006) Introduction. In: Dracula and the Eastern Question. Palgrave Macmillan, London