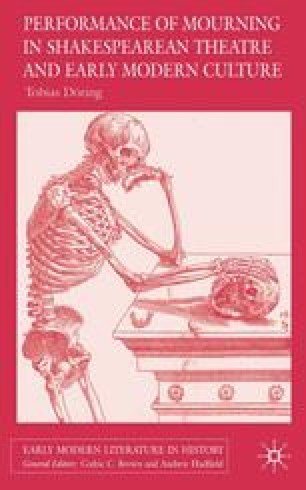 Tears and other signs of mourning, we have seen in the previous chapter, need not always indicate true grief. The same applies to the poetic forms of mourning. After Edmund Campion died at Tyburn in December 1581, Anthony Munday published an elegy for him which began:

Why doo I vse my paper, inke and pen,

and call my wits in councell what to say?

Such memories were made for woorthy men,

And not for such as seeke their Realms decay.

When shame rings forth the Traitors fearful rueth.

Pardon my want, I offer naught but will,

To not downe those, at whome the Skies do skowle:

Campion, his treasons do exceed my skil,

The cause, his comming, and the deed too fowle:

Yet giue me leaue in base and homely verse:

His lewd attempts in England to rehearse.

It may take us a few lines — and perhaps a second reading — before we realize the specific nature of this tribute. The text employs topoi from the traditional repertoire of poetic mourning: the poet is apologetic and self-conscious and craves indulgence to present his ‘homely verse’. But all these topoi are not used here to mourn for the deceased, but to condemn his deeds and to denounce his person. As it turns out, this elegy is a polemic slur on Campion published to defile rather than preserve his noble memory.

Cultural Memory Religious Culture Funeral Rite Sacred Ritual Rhyme Word
These keywords were added by machine and not by the authors. This process is experimental and the keywords may be updated as the learning algorithm improves.
This is a preview of subscription content, log in to check access.