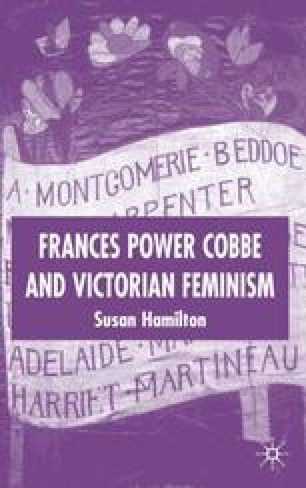 Victorian Feminism and the Periodical Press

Frances Power Cobbe was a mid-Victorian feminist journalist and one of a handful of women to make a steady living writing for the mid-nineteenth century established press. She was involved in the national women’s suffrage campaign, argued for women’s increased educational and employment opportunities, and was a vocal critic of marriage. She worked to improve education for ‘ragged’ or homeless children and the condition of workhouses. She was instrumental in the passage of the 1878 Matrimonial Causes Act, which made domestic violence grounds for legal separation. She also agitated on behalf of, and helped to write, the 1876 Cruelty to Animals Act, which sought to limit the use of live animals in scientific experiments. She was one of the best-known feminist thinkers of her day.

Domestic Violence Feminist Identity Woman Writer Periodical Press Legal Separation
These keywords were added by machine and not by the authors. This process is experimental and the keywords may be updated as the learning algorithm improves.
This is a preview of subscription content, log in to check access.