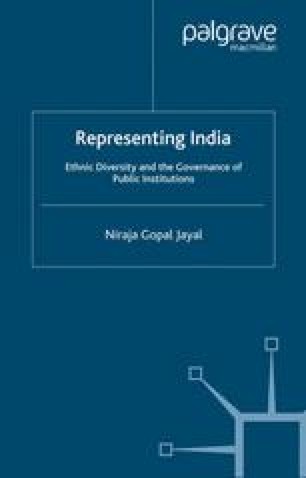 Promoting diversity and protecting the vulnerable

Apart from the other safeguards intended to protect members of disadvantaged groups – such as reservations in legislative bodies, public employment and public education – which have been discussed in the previous chapter, the Constitution of India also made provision for a watchdog institution, originally called the Special Officer for the Scheduled Castes and Scheduled Tribes, to oversee the implementation of these safeguards. In 1990, this was redesigned, by constitutional amendment, as the National Commission for Scheduled Castes and Scheduled Tribes, a constitutionally mandated body designed to protect the interests of these groups. The NCSCST was intended to monitor, on a regular and ongoing basis, the implementation of the various provisions – social, economic, educational and political, provided in the Constitution for members of the scheduled castes and scheduled tribes. Similar institutions were subsequently set up for religious minorities and backward castes, the National Commission for Minorities (1992) and the National Commission for Backward Classes (1993), respectively. In this chapter, we examine the functioning of the NCSCST as an institution entrusted with the task of submitting to Parliament an annual report on the implementation of the safeguards constitutionally provided for these two groups.

National Commission Constitutional Amendment Religious Minority Schedule Caste Schedule Tribe
These keywords were added by machine and not by the authors. This process is experimental and the keywords may be updated as the learning algorithm improves.
This is a preview of subscription content, log in to check access.