The Origins of Modern Spin 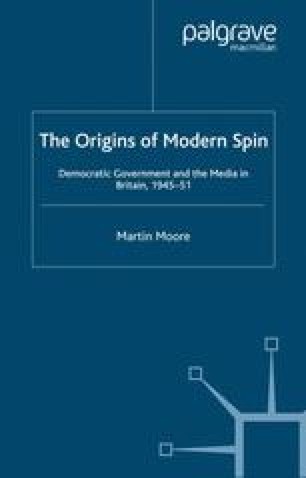 Idealistic Intentions: Striving to Speak to the People

There is a famous David Low cartoon from June 1945 in which Rodin’s Thinker holds out the options open to the British people after the war. On the left is ‘Haphazard enterprise for private profit’. On the right is ‘Planned development for the higher good’. The cartoon wonderfully captures the attitude of many of those on the left of the Coalition government in the latter stages of the war. They believed there was a straightforward choice between a return to the chaos and confusion of the 1930s or the creation of a new, planned and ordered society. The choice was as clear and the answer as obvious to them as Low’s cartoon implied.1

Information Service Public Relation Information Policy Government Information British People
These keywords were added by machine and not by the authors. This process is experimental and the keywords may be updated as the learning algorithm improves.
This is a preview of subscription content, log in to check access.

Cite this chapter as:
Moore M. (2006) Idealistic Intentions: Striving to Speak to the People. In: The Origins of Modern Spin. Palgrave Macmillan, London