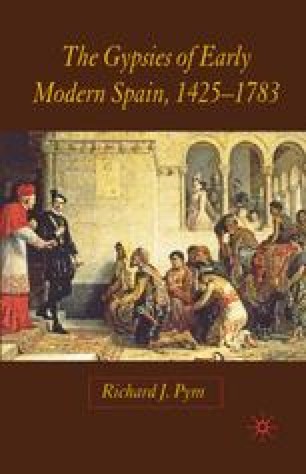 The Spanish Church and the Gypsies

The relationship between the Spanish Catholic Church and the gypsies was played out over the early modern period on two main and in some ways overlapping fronts. There were, of course, the strident condemnations of the gypsies’ way of life by clerics such as Melchor de Huélamo, Salazar de Mendoza, Sancho de Moncada, and others. These reflected, and not infrequently amplified the Church authorities’ serious concerns about the gypsies’ irreligión or notoriously tenuous or, as many thought, wholly feigned attachment to the faith. In 1601, even the Archbishop of Toledo and Primate of all Spain, Bernardo de Sandoval y Rojas, Lerma’s uncle, echoing demands progressively enshrined in legislation from the time of the Catholic Monarchs, instructed both ecclesiastical judges and ordinary clergy to see to it that gypsies in their areas were baptized.1 They should also ensure, he added, that efforts were made to assimilate these wayward people to the manners and morals of mainstream society. In September the following year, in the Synodal Constitutions of his diocese of Cuenca, the bishop and future Inquisitor-General Andrés Pacheco expressed similar concerns about the spiritual welfare of both the area’s re-settled Granadine moriscos and its gypsies.

Corporal Punishment Spiritual Welfare Sexual Offence Public Prosecutor Early Modern Period
These keywords were added by machine and not by the authors. This process is experimental and the keywords may be updated as the learning algorithm improves.
This is a preview of subscription content, log in to check access.