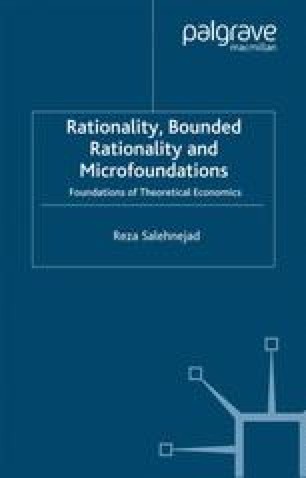 Modern economies consist of millions of heterogeneous decision-making units interacting with each other, facing different choice situations, and acting according to a multitude of different rules and constraints. The interaction of these decision-making units at the micro-level gives rise to certain regularities at the economy level, which form the subject matter of macroeconomics. The complexity of modern economies makes it impossible to build an analytic model that represents the behaviour of all the decision-making units populating the economy. In modelling the economy, it is necessary to leave many details out, introduce aggregate variables, and focus on the relations among the aggregates. Macroeconomics is primarily the study of aggregates.

Causal Inference Causal Structure Joint Probability Distribution Choice Situation Bounded Rationality
These keywords were added by machine and not by the authors. This process is experimental and the keywords may be updated as the learning algorithm improves.

As economics pushes on beyond ‘static’ it becomes less like science, and more like history. (Hicks, 1979: xi).