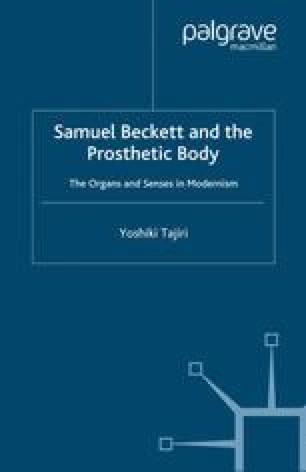 Samuel Beckett and the Prosthetic Body pp 13-39 | Cite as

The Prosthetic Body and Sexuality

This chapter aims to discuss the prosthetic body in Beckett in terms of sexuality and gender. In his early work, there is an interesting connection between the mechanisation of the body and a peculiar type of sexuality. The prosthetic body here, therefore, primarily refers to the mechanised body that this special sexuality tends to entail. I will start with an analysis of an early scene in Dream of Fair to Middling Women (written in 1931–32 but published posthumously in 1992),1 where Belacqua’s disguised masturbation is described as a mechanical process. Belacqua’s ‘masturbation machine’ exemplifies the nexus of the allure of the womb, the avoidance of women’s physical presence, and mechanical imagery. When considering the psychic mechanism underlying this nexus, which is characteristic of Beckett’s early work, I put stress on situating Beckett’s mechanisation of the sexual body in the larger context of modernist art and literature, referring to Michel Carrouges’ notion of the ‘bachelor machine’, Klaus Theweleit’s analysis of Nazi soldiers’ psychology, Hal Foster’s discussions of modern artists and other relevant material. This is intended to make up for Beckett critics’ relative lack of interest in contextualising Beckett’s work in terms of what Tim Armstrong calls ‘prosthetic modernism’ or ‘mechanomodernism’. In the final section, I will briefly consider how the above-mentioned nexus is transformed in Beckett’s later work, where the strict dichotomy between man and woman gives way to more indeterminate gender configurations.

Sexual Drive Romantic Period Sexual Body Mechanise Body Strict Dichotomy
These keywords were added by machine and not by the authors. This process is experimental and the keywords may be updated as the learning algorithm improves.
This is a preview of subscription content, log in to check access.