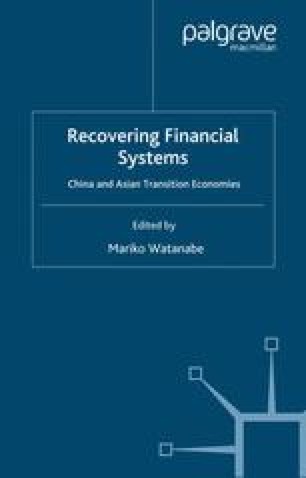 One of the central characteristics of the transition process from a centrally planned economy to a market economy is the transformation of the mechanism of capital accumulation – how savings are made and allocated among potential investment projects in an economy. In a centrally planned economy it is the state planning and its administrative mechanism that coordinate the decisions of savings and investment for the nation as a whole. By contrast, in a market economy it is the financial markets and financial intermediaries that coordinate the decisions of savers and investors. To the extent that market institutions evolve over time, one should expect that during the initial stages of the transition process the functions performed by financial markets and intermediaries fall short of those observed in well-developed market economies, and that they improve only gradually in line with the progress of institution building. A natural question is whether it is possible to test empirically the hypothesis that financial institutions evolve gradually and that their functions are imperfect at the beginning of the transition.1

Capital Market Market Economy State Planning Public Investment Saving Rate
These keywords were added by machine and not by the authors. This process is experimental and the keywords may be updated as the learning algorithm improves.
This is a preview of subscription content, log in to check access.

Cite this chapter as:
Watanabe S. (2006) The Inter-Provincial Capital Flows in China Before and After the Transition to a Market Economy. In: Watanabe M. (eds) Recovering Financial Systems. IDE-JETRO. Palgrave Macmillan, London. https://doi.org/10.1057/9780230624863_4