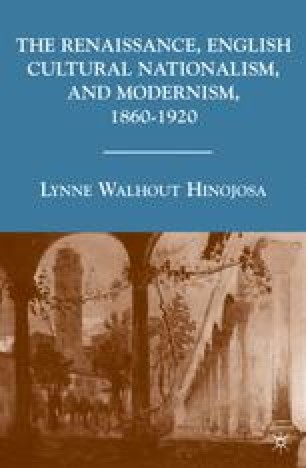 With the market for Italian art increasingly expanded in the second half of the nineteenth century, texts like Burckhardt’s on Italian art and culture along with a long-standing interest in the fate of the Italian nation made the concept of the Renaissance a popular one in England in the 1880s and 1890s. Pasquale Villari’s two volumes on Savonarola (1859–1861), translated into English in 1888, were widely read, especially among those who followed Italy’s Risorgimento movement. George Eliot relied on these volumes as she wrote her Renaissance historical novel, Romola (1863). Villari also wrote on Machiavelli (1877–1882; trans. 1892). Two other notable volumes were Hippolyte Taine’s Philosophy of Art in Italy (1866; trans. 1866), which helped to naturalize Burckhardt’s ideas in France, and Francesco de Sanctis’s History of Italian Literature (1870–1871). The preRaphaelite painters and others produced contemporary art in imitation of Italian Renaissance art, while exhibitions of Italian art in England influenced poets such as Charles Algernon Swinburne and Robert Browning. Bernard Berenson had tremendous influence in the world of Renaissance art collecting, connoisseurship, and art theory; chapter 5 examines his writings in a continued discussion of Italian art in England.

National Culture Modern World Everyday Object Human Spirit Classical Culture
These keywords were added by machine and not by the authors. This process is experimental and the keywords may be updated as the learning algorithm improves.
This is a preview of subscription content, log in to check access.