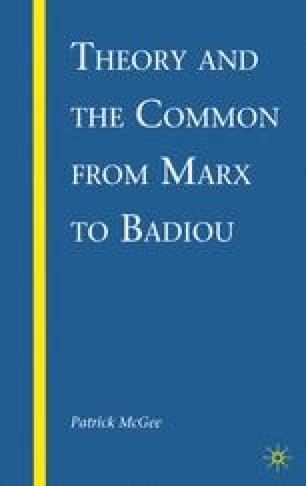 Not a Manifesto
Chapter

A manifesto is what we need, but this is not it. Such a writing, like Marx’s famous manifesto, is an event in itself, something that decides an undecidable and forces the emergence of a truth. Nonetheless, it seems to me that it is cowardly not to risk a few postulations about what such a manifesto might contain. This is risky because it anticipates the alteration of a world without identifying the event that would occasion it. Furthermore, the more specific you are about the political program that confronts the current state of the situation, which also means the State, the more likely you are to say something that will seem ridiculous to the vast majority who currently cannot imagine any other world. Even Marx had to take this risk at the end of section two of his great manifesto when he listed ten practical measures that the victorious proletariat would need to implement after it had won the battle for democracy and centralized production in the State.1

Common Sense Political Organization National Union Electoral Politics Political Field
These keywords were added by machine and not by the authors. This process is experimental and the keywords may be updated as the learning algorithm improves.
This is a preview of subscription content, log in to check access.