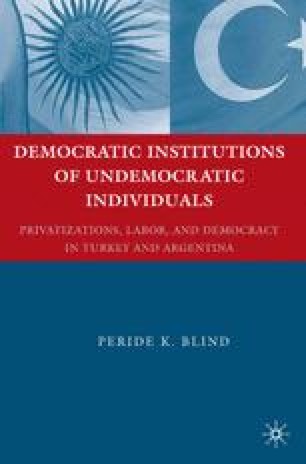 A Recipe for Deciphering Democratization Today

Globalization is the increasing interconnectedness of the world through economic, political, and social ideas, institutions, and exchanges. The dominant and unfettered role of state in the production of goods and services does not belong to the globalized world. Economic globalization entails the downgrading of state interventions in economy through the privatization of state-owned sectors and enterprises. Privatization, as the most significant and direct tool for reducing the scope of state in the economic sphere, also involves a restructuring of state-society relations. The new forms of politics created and stimulated by privatization bring the possibility of “globalization from below”—social movements that seek to create autonomous political structures from the grass roots up. Privatization, in this regard, is not only the most political tool of economic globalization but also its microcosm.

Civil Society Labor Union Union Membership Union Leader Democratic Institution
These keywords were added by machine and not by the authors. This process is experimental and the keywords may be updated as the learning algorithm improves.
This is a preview of subscription content, log in to check access.