Conversion and Reform in the British Novel in the 1790s 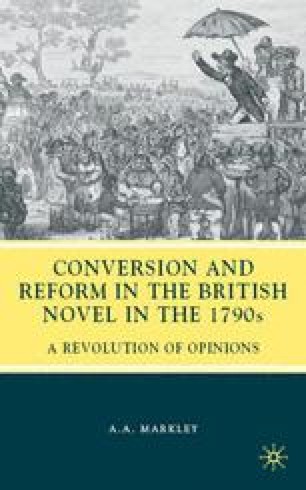 Race and the Disenfranchised in 1790S Britain

In the second volume of her dialogues for children, Rambles Farther (1796), Charlotte Smith addresses the subjects of race and slavery in a dialogue entitled “The Little West Indian.” In this work the main characters, Mrs. Woodfield, her children, and her niece Caroline, are joined by Ella Sedley, a child from the West Indies who is sent to England along with her African nurse, Mimbah, when she loses her mother. Mimbah’s homesickness inspires a discussion of the strong habit that attaches even slaves to their home. “Happiness depends, after all,” Mrs. Woodfield says, “less on local circumstances than on the habits of our minds.”1 Mrs. Woodfield takes advantage of the opportunity to teach the children about slavery, explaining that those who are brought up in the West Indies do not recognize slaves as fellow human beings (XII:119). When Caroline asks how slavery can be justified, Mrs. Woodfield presents contemporary arguments for the institution and points out the fallacy behind each one. The argument that slavery is justifiable due to its long custom is one, she explains, that could support any abuse. Mrs. Woodfield also argues that the claims that slavery is an economic necessity and that slaves are happier than they would be in their native environment are equally fallacious.

Racial Difference Eighteenth Century Slave Trade Late Eighteenth Century Racial Prejudice
These keywords were added by machine and not by the authors. This process is experimental and the keywords may be updated as the learning algorithm improves.
This is a preview of subscription content, log in to check access.