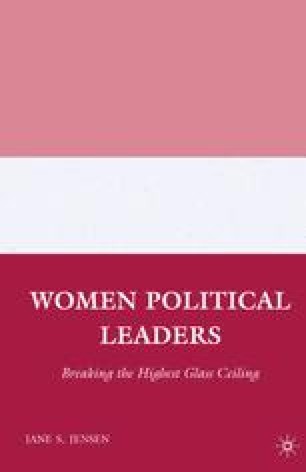 While attending the annual Conservative Party conference in 1948 as a representative of the Oxford Graduate Association, Margaret Thatcher met a friend from her days at the university, John Grant, who remarked that she must be interested in being a member of parliament some day. She responded by noting that there was little chance of that happening and that she had not even made an effort to get on her party’s list of approved candidates. Later Grant, while sitting next to the chairman of the Dartford Conservative Association, observed that the district was still looking for a candidate, and the chairman responded by asking if Grant had any suggestions. As Thatcher tells the story, Grant replied, “‘Well, there’s a young woman, Margaret Roberts, that you might look at. She’s very good.’ ‘Oh, but Dartford is a real industrial stronghold. I don’t think a woman would do at all.’ ‘Well, you know best of course. But why not just look at her?”’1

Prime Minister Civil Servant Foreign Affair Political Arena Foreign Minister
These keywords were added by machine and not by the authors. This process is experimental and the keywords may be updated as the learning algorithm improves.
This is a preview of subscription content, log in to check access.