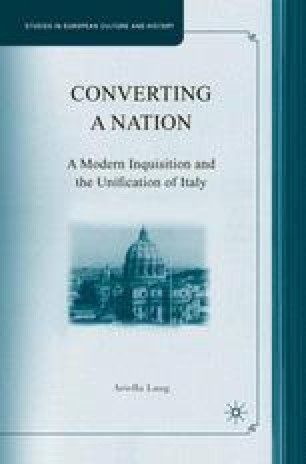 The complicated relationship between Church and state during the Risorgimento has serious ramifications for Italian and Vatican politics in the twentieth century, when religious difference and issues of nationhood took on new, more perilous meanings to which the Vatican was forced to respond. In 1870, Italian troops took Rome, leading Pius IX to barricade himself within the Vatican; soon thereafter he forbade Catholics from participating in the political life of the new Italy, as electors or as candidates. Following the Syllabus of Errors, this last act once again illustrated Pius’s vehement opposition to the establishment of a unified Italy with Rome at its center. Fifty years later, however, relations between the Vatican and the Italian state that surrounded it seemed to be on the mend: Benito Mussolini, eager to legitimize his rule and gain support at home and abroad, appeared particularly willing to negotiate with Church leaders. For its part, the Vatican, leery of nineteenth-century liberalism, and still bitter over the loss of much of its land and temporal power, viewed the rise of authoritarian governments quite favorably, believing that these one-party leaders would better serve the interests of the Church. Mussolini, for example, was opposed to communism, deemed a worrisome threat by Vatican leaders, and he appeared disenchanted, to say the least, with other liberal, socialist groups that were critical of the Church.

Authoritarian Government Church Leader Italian State Racial Policy Catholic Identity
These keywords were added by machine and not by the authors. This process is experimental and the keywords may be updated as the learning algorithm improves.
This is a preview of subscription content, log in to check access.