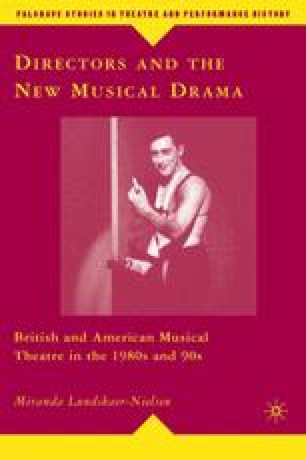 Between January 2003 and May 2004, as part of my research for this project, I interviewed a wide range of theatre professionals in New York and London, including writers, directors, producers, arts funders, and other people involved in the creation and production of new musicals in the 1980s, 90s, and beyond. My aim was to build up a full picture of this era in musical theatre history from people who were direcdy involved and to include some of their insights in my study. As I progressed, I realized how uniquely privileged I was to have had the opportunity to travel between these two musical theatre capitals and to have been granted access to such a diverse and distinguished group of musical theatre professionals.

Musical Theatre British Director Musical Drama Artistic Director Grand Canal
These keywords were added by machine and not by the authors. This process is experimental and the keywords may be updated as the learning algorithm improves.
This is a preview of subscription content, log in to check access.