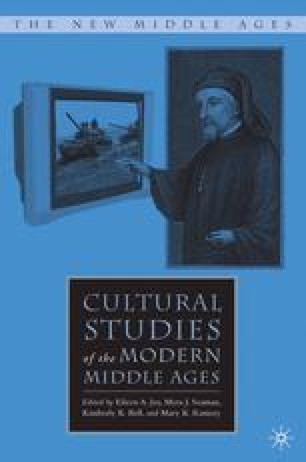 “She Appears as Brightly Radiant as She Once was Foul”: Medieval Conversion Narratives and Contemporary Makeover Shows

On the surface of things—which is where a good portion of this inquiry takes place, although perhaps not in the same sense as the introductory phrase implies—a medieval conversion narrative and a contemporary makeover show appear to have so little in common as to be strange bedfellows. However, it is exactly at the surface, or perhaps in their understanding of the surface, that they are inextricably linked. Concerned with transformations—“the word [conversion] itself comes from a Latin word that means to change or transform one thing into another”1—both genres employ substantially similar rhetoric to reach the same goals. A process as well as an event, conversion and makeovers both work in two directions, from society inward and from the individual outward. For those in need of change (‘need’ being a fairly loosely defined term), social assumptions and conventions provide the models and options for conversion, and the transformation takes place on the body and in the mind of the individual, who then returns to society in a different place. If Hrotsvit of Gandersheim’s dramas are rarely considered in the same breath as the Learning Channel’s What Not To Wear, they—as well as many of their medieval and modern analogues—offer surprisingly similar goals, played out on the surface in unsuperficial ways.

Internal Change Religious Conversion Religious Woman Pageant Contestant Medieval Text
These keywords were added by machine and not by the authors. This process is experimental and the keywords may be updated as the learning algorithm improves.

In medieval texts such as the plays of Hrotsvit of Gandersheim and the epic Prise d’Orange, and in modern makeover shows such as Extreme Makeover or What Not To Wear, the transformative experience of conversion is accomplished through a rhetoric of self-abnegation and submission to greater authorities. Thus, narratives of transformation, medieval and modern, ultimately present anxieties inherent in societies that attempt a simultaneous combination of exclusion and incorporation.