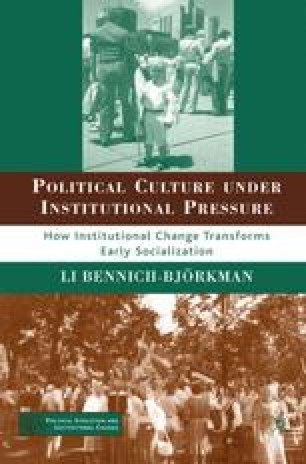 To what extent do existing institutions particularly determine the political culture of a society, and to what extent does culture exist independently? In this book I return to the question that has been a concern of political science ever since Gabriel Almond and Sidney Verba published their classic study on civic culture in 1963.1 What happens to socialized worldviews when these views fall under the long-term influence of political and social institutions that are different from the ones that played a role during a person’s early, formative years? Do the original orientations change? Or do they endure, despite what the new institutional setting seems to “demand”? There are few scholars today who deny the process of mutual influence and feedback between how institutions are constructed and values and perceptions people hold in respect to politics. But just how long is needed for institutional impact to begin to show itself on the individual cultural level? While some speak about generations, others claim that single individuals are themselves open to change within their life spans. How institutions and culture actually interact, and what this interplay implies for cultural change are major theoretical questions for political science and the social sciences, but are also questions in need of further empirical investigation.2

Political Science Institutional Change Political Culture Cultural Theory Rational Choice Theory
These keywords were added by machine and not by the authors. This process is experimental and the keywords may be updated as the learning algorithm improves.
This is a preview of subscription content, log in to check access.