Social Forces and the Revolution in Military Affairs 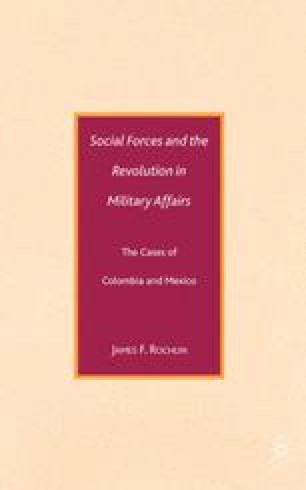 Despite its typical association with great powers and Middle Eastern politics, the RMA is a global phenomenon with clear manifestations in the Americas. As we observed in Chapter 1, the RMA is very much a work in progress, though its features are becoming clearer. This rupture has entailed asymmetric conflict, complexity, new forms of organization, the use of ultra-surveillance, a variety of themes linked to a globalized political economy, as well as epistemological considerations. This chapter will address how various elements of the RMA have worked together in a synergetic fashion to explain strategic change in Colombia and Mexico.

Civil Society Social Force Identity Politics Strategic Change Global Civil Society
These keywords were added by machine and not by the authors. This process is experimental and the keywords may be updated as the learning algorithm improves.