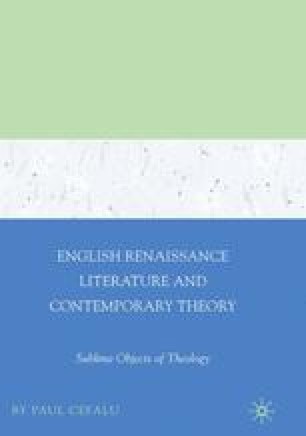 Tarrying with Chaos: John Milton’s Paradise Lost and the Ethics of Psychoanalysis

One would have expected that Slavoj Žižek would at some point turn his gaze on Milton’s Paradise Lost. The above epigraphs, taken from Ž ižek’s The Plague of Fantasies, are concerned with some of the cruxes of Paradise Lost: whether Adam did indeed have sexual relations with that helpmeet, Eve, in Eden, and whether Satan’s diabolical evil is distinct from radical evil in that Satan establishes an all-purpose maxim to pursue evil against the moral law as such. Unfortunately, Ž ižek does not develop these potentially rich notions in relation to Paradise Lost—notions that might have resurfaced in Ž ižek’s later systematic assessments of Christianity: On Belief, The Fragile Absolute, and The Puppet and the Dwarf.3 The following pages offer a reading of Paradise Lost that Ž ižek might have offered had he returned to Paradise Lost in the context of his recent inquiries into God’s fragile absolutism. In his later work, Ž ižek returns again and again to the notion that the Christian God is Other to himself (a subject alienated from the real like any creaturely subject), but breaks through the boundaries of his imaginary “ego” by incarnating himself as Christ.

Moral Evil Paradise Lost Mirror Stage Radical Evil Primary Narcissism
These keywords were added by machine and not by the authors. This process is experimental and the keywords may be updated as the learning algorithm improves.

—Slavoj Žižek, The Plague of Fantasies

[Satan] elevates evil (rebellion against God) into the consistent ethical attitude of a strong character. The only thing to add is that purely one-dimensional evil (a simply egotistical mean person) is not true evil at all: true evil involves precisely the blurring of distinctions between Good and Evil—that is, the elevation of evil into a consistent principle. 2