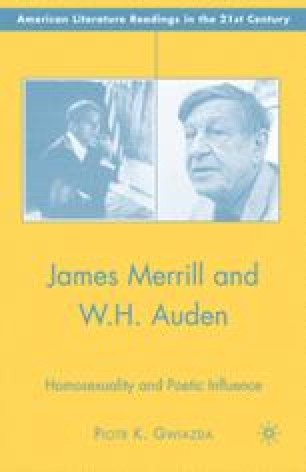 The Changing Light at Sandover looms large in the history of twentieth-century poetry as a virtuoso performance illustrating Merrill’s advancement from the incontestable merit of Nights and Days and Braving the Elements to literary mastery of Popean proportions. The trilogy won him the National Book Critics Circle Award and the Los Angeles Times Award—this in addition to Pulitzer Prize, Bollingen Prize, two National Book Awards, and other honors he accumulated throughout his career. Though it was followed by three full-length poetry collections, Sandover remains a capstone of Merrill’s achievement, proving him not only the author of unforgettable lyrical and narrative poems, but the creative intelligence behind a genuine epic enterprise. In the period when literature was rumored to have reached a state of exhaustion, and the epic was considered very much a dead genre, Merrill composed (or partially transcribed, he would say) a vast poetic trilogy whose topics range from metaphysics and molecules to opera and homosexuality. A contemporary Orpheus, Merrill crosses over to the realm of the dead, his picture of the afterlife—with its patrons, tribunals, hierarchies—owing much to Jean Cocteau’s surrealist retelling of the myth.1 Sandover features an assembly of supernatural forces, dead souls, living friends and family members, figures of poetic authority, and last but not least the author himself engaged, with his longtime partner, in a spiritual quest.

Supernatural Force National Book Spiritual Quest Pulitzer Prize Creative Intelligence
These keywords were added by machine and not by the authors. This process is experimental and the keywords may be updated as the learning algorithm improves.
This is a preview of subscription content, log in to check access.