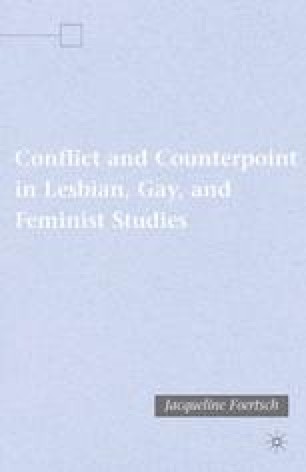 Conflict and Counterpoint in Lesbian, Gay, and Feminist Studies pp 133-185 | Cite as

Why We Watch: Lesbian, Gay, and Feminist Approaches to Film

In Flaming Classics, Alexander Doty records an exchange with a straight female student, who asks about favorite icons of gay male film fans. At his mention of a particular screen diva from the classical Hollywood period, the student reportedly interjected, “Don’t take Bette Davis away from us, too!,” and Doty describes his frustration at this response: “Before this, I hadn’t thought of gay culture … as taking anything away from anyone… Was I ever naive: I guess most people out there really are lifting up their leg or squatting to mark their popular cultural territory” (53). One of Doty’s contributions to the discussion of film’s intersection with sexuality studies is his firm rejection of the “appropriator” position for gay and lesbian viewers. For Doty, to position oneself as queer appropriator of straight-identified Hollywood cinema, as multiple gay and lesbian film theorists have done, is to concede the original rights to these images, narratives, and meanings to the heterosexual hegemony, a concession Doty refuses to make. In the quote above Doty bisexes the pissing-pet image to refer not only to the straight male filmmakers and filmgoers notorious for their territoriality but also to the women who have been squatting in this field for decades, claiming their feminist squatter’s rights, and likely including the student whose remarks initiated the discussion.

Feminist Theorist Psychoanalytic Theory Film Theorist Black Widow Popular Film
These keywords were added by machine and not by the authors. This process is experimental and the keywords may be updated as the learning algorithm improves.
This is a preview of subscription content, log in to check access.