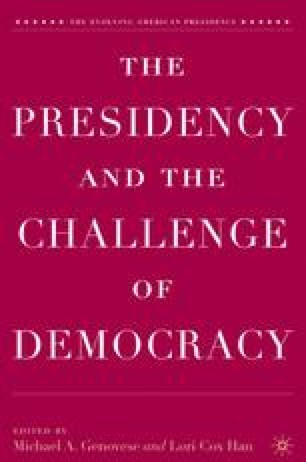 The Constitutional Checks and Balances that Neither Check Nor Balance

The genius of the constitutional system that Madison gave us was its fundamental reliance on the concept of checks and balances as the vehicle for guaranteeing limits on government power. Each branch would monitor or watch over the others to insure that no branch exceeded its authority or invaded another’s sphere. Such a system of governmental “insurance” depended upon each branch exercising its responsibility and vigilance at all times. Throughout history, examples abound of one renegade branch edging beyond its borders, only to be reined in by either one or both of the others. But what if the enforcing institutions do not perform this role, either inadvertently or intentionally? Are we at one of those historical junctures where the institutions of government are out of balance, and are in need of being reminded of the essential purpose of Madison’s structural design and allocation of authority?

Federal Court Geneva Convention Military Tribunal Military Commission Habeas Corpus
These keywords were added by machine and not by the authors. This process is experimental and the keywords may be updated as the learning algorithm improves.
This is a preview of subscription content, log in to check access.

Cite this chapter as:
Kassop N. (2006) The Constitutional Checks and Balances that Neither Check Nor Balance. In: Genovese M.A., Han L.C. (eds) The Presidency and the Challenge of Democracy. The Evolving American Presidency Series. Palgrave Macmillan, New York. https://doi.org/10.1057/9780230600744_4