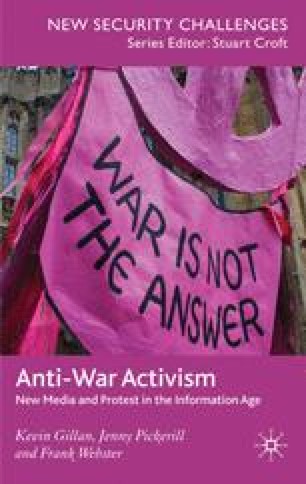 The concern of this chapter is with the information environment of war, its distinguishing features, and ways in which the anti-war and peace movement adapts and contributes to this changing domain. By information environment we mean the full range of information resources available to the public, which may extend from recollections of returning combatants to newspaper reportage, from personal experiences of conflict to satellite television coverage. We spell out how and why this information environment is now significantly different from that found in earlier forms of war. We go on to argue that this provides opportunities for anti-war activists to participate in struggles of representation and interpretation that are a key component of today’s Information War.

Public Meeting Mainstream Medium Alternative Information Established Medium Guardian Newspaper
These keywords were added by machine and not by the authors. This process is experimental and the keywords may be updated as the learning algorithm improves.
This is a preview of subscription content, log in to check access.