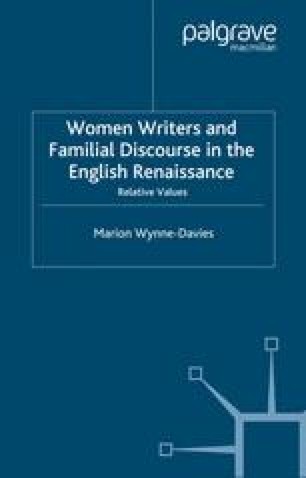 The second branch of the More familial discourse emerges in the Rastell/ Heywood line, beginning with the collection of More’s works brought together by William Rastell and concluding with John Donne’s works with their fraught rejection of his Morean inheritance. The Roper/Bassets were characterised by the singular continuity of a biographical discourse and perpetuation of the familial discourse. The Rastell/Heywoods, on the other hand, represent the way in which the discursive practice of the Mores reached a point of schism in which faith divided rather than united Thomas More’s descendants. There are no women writers in this line of Morean descent, although a comparison of the responses to the familial discourse by John Donne and Gertrude More, discussed in Chapter 3, evidences the way in which schism and assimilation functioned in a gendered context.

Morean Discourse Woman Writer English Work Henry VIII Family Discourse
These keywords were added by machine and not by the authors. This process is experimental and the keywords may be updated as the learning algorithm improves.
This is a preview of subscription content, log in to check access.