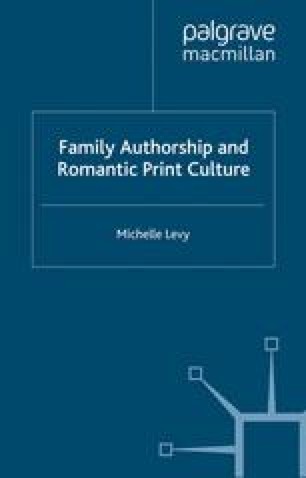 Family, Nation, and the Radical Education of Anna Barbauld and John Aikin

The attacks against Anna Barbauld, culminating in John Wilson’s Croker’s “outrageously abusive” review of her anti-war masterpiece, Eighteen Hundred and Eleven, tell a familiar narrative about the narrowing of possibilities for political intervention on the part of female authors.1 Recent scholarship has dismissed these attacks as sexist or partisan, or both, an assault on the radical Dissenting community of which she was a part. And yet the hostility Barbauld incurred frequently went beyond the bounds of political opposition: it reflected a deeper if less vehement disagreement over the way in which authorial greatness was conceived. For if Dr. Johnson characterized her transition to educational writing as a “voluntary descent from possible splendour to painful duty,”2 while Croker deplored her movement from the nursery back to public verse, both critics are united in the opinion that, however “respectful and useful” Barbauld’s educational activities were, they occupied a lesser sphere of literary endeavor.3 The hierarchy of genres gave little weight to educational writing despite the enormous practical importance that Locke, among others, had vested in it, linking the success even of primary instruction to “the welfare and prosperity of the nation.”4 The belief that education had little to do with England’s political future was one that Barbauld and her brother (and life-long collaborator) John Aikin vigorously refuted.

Moral Knowledge Rational Conversation Female Author Frame Narrative Fellow Creature
These keywords were added by machine and not by the authors. This process is experimental and the keywords may be updated as the learning algorithm improves.

I hate by-roads in education. Education is as well known, and has long been as well known, as ever it can be. Endeavouring to make children prematurely wise is useless labour. Suppose they have more knowledge at five or six years old than other children, what use can be made of it? It will be lost before it is wanted, and the waste of so much time and labour of the teacher can never be repaid. Too much is expected from precocity, and too little performed. Miss—[Aikin] was an instance of early cultivation, but in what did it terminate? In marrying a little Presbyterian parson, who keeps an infant boarding-school, so that all her employment now is, “To suckle fools, and chronicle small-beer.” She tells the children, “This is a cat, and that is a dog, with four legs and a tail; see there! you are much better than a cat or a dog, for you can speak.” If I had bestowed such an education on a daughter, and had discovered that she thought of marrying such a fellow, I would have sent her to the Congress.

But [Barbauld] must excuse us if we think that she has wandered from the course in which she was respectable and useful, and miserably mistaken both her powers and her duty, in exchanging the birchen for the satiric rod, and abandoning the super-intendance [sic] of the ‘ovilia’ of the nursery, to wage war on the ‘reluctantes dracones,’ statesman, and warriors, whose misdoing have aroused her indignant muse.

Cite this chapter as:
Levy M. (2008) Family, Nation, and the Radical Education of Anna Barbauld and John Aikin. In: Family Authorship and Romantic Print Culture. Palgrave Studies in the Enlightenment, Romanticism and Cultures of Print. Palgrave Macmillan, London. https://doi.org/10.1057/9780230590083_2