The Politics of Economic Inequality in Developing Countries 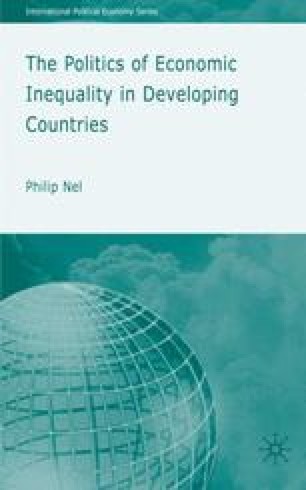 Democratization to the Rescue?

Domestic politics and policies, the previous two chapters have argued, contribute substantially to the maintenance and exacerbation of odious inequality in developing countries. Does this mean that political reform, and in particular the introduction of democracy, can reverse the historical patterns of increasing inequality? After all, Chapter 3 argued that it was the introduction of universal franchise and responsive government, amongst others, that contributed to the ability of core capitalist countries to put abreakon inequality during the heyday of the welfare state.1 It is commonly assumed that the introduction of democracy into a polity allows the poorer sections of the community to alter the distribution of wealth and income in their favour. The assumption that the acquisition of political power by the once disenfranchised leads to greater economic equity was and is at the core of the political programmes of many working-class based political movements, and also provides one of the motivations for rich owners of immovable wealth in unequal societies to resist democratization vehemently, and as long as possible (Boix, 2003). Understandbly, thus, expectations were high that the eventual widespread arrival of democracy in the developing world during the 1980s and 1990s would empower the poor and previously disenfranchised to mitigate odious inequality and to secure a larger degree of economic equity.

Median Voter Regime Change Economic Inequality Capital Mobility Income Share
These keywords were added by machine and not by the authors. This process is experimental and the keywords may be updated as the learning algorithm improves.
This is a preview of subscription content, log in to check access.