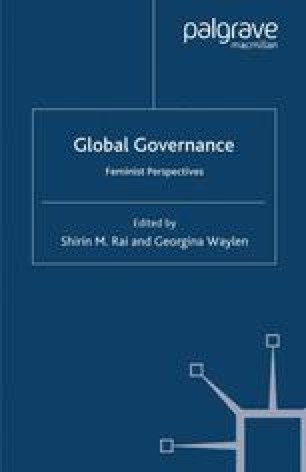 As I stood in the international terminal of the Cancun, Mexico air-port on the afternoon of September 14, 2003, I was struck by how the scene epitomized the condition, complexity, and contradictions of the current debate on globalization. A buzz of energy filled every inch of the space as thousands of people — women and men of every colour, clothed in an incredible array of hues and styles — streamed into the airport following the collapse of the 146 nation World Trade Organization (WTO) negotiations. Some of the people who had been inside the conference center just a few hours earlier knew that the negotiations had broken down and that delegates from a number of governments walked out as it became clear that core conflicts among them could not be resolved and consensus could not be reached. However, many inside the conference center, and the thousands of protestors kept out by the fortress-like fencing and the slews of police and military officers blanketing this tourist “Mecca”, had little information about what was actually occurring. In this environment of militarized mistrust, rumors spread like wildfires: “Delegates from the G-211 stormed out”, “G-21 Delegates coordinated an action and all marched out of the negotiations”, “Brazil walked out”, “There was a big demonstration in the conference cen-ter”, “The US negotiators called it quits and said the meeting was over”, “backup military forces were called in to quell the riot like atmosphere”, “NGO delegates were arrested”, “Government delegates were arrested”. Strangers talked easily to one another sharing information as we waited in unbelievably long lines.

World Trade Organization Trade Policy Global Governance North American Free Trade Agreement Feminist Activist
These keywords were added by machine and not by the authors. This process is experimental and the keywords may be updated as the learning algorithm improves.
This is a preview of subscription content, log in to check access.