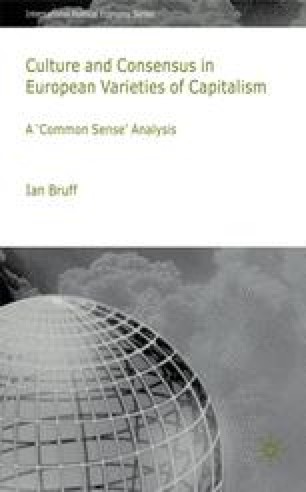 This book has made the case for the superiority of a neo-Gramscian framework when analysing the trajectories of European varieties of capitalism. It has done so through engaging with the varieties of capitalism literature with regard to the role of consensus in these trajectories. I have argued that through delimiting the formation of consensus to the institutional environment, the varieties of capitalism literature cuts institutions off from the society they are rooted in. In contrast, I asserted that we need to consider culture in order to conceptualize adequately the role of consensus. The conceptual apparatus provided by Antonio Gramsci’s notion of ‘common sense’ makes it possible for a thorough analysis to be offered, for the degree of overlap between different versions of common sense — or cultures — shapes the possibility for synthesis between different perspectives in the form of a consensus. This was demonstrated through the utilization of the theoretical framework to analyse the empirical data presented in Chapters 5–7, and is summarized by Table 8.1.

Common Sense Material Condition Historical Materialism Conceptual Apparatus European Variety
These keywords were added by machine and not by the authors. This process is experimental and the keywords may be updated as the learning algorithm improves.
This is a preview of subscription content, log in to check access.