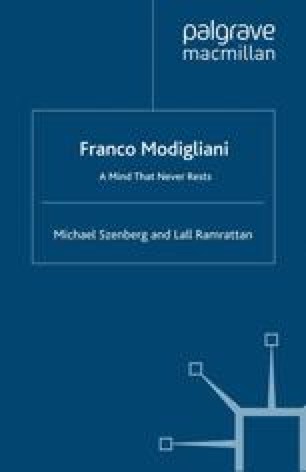 Modigliani penned an autobiography relating his experiences in Italy, America and other European countries.1 For each country, he presents his major works like a meal consisting of graphs, symbols, data, and explanations for general readers to digest. A “scientific autobiography” written by “a ferocious Galileo,” says Samuelson. “His memoirs are just like him. Any reader will get to know a delightful person and learn some economics besides,”2 echoes Solow. Adventures stands besides other biographical pieces Modigliani had written, one for his Nobel Prize in 1985,3 and a chapter in a book.4 Why should we have another record of his life and works?

Nobel Prize European Monetary Union Childhood Memory Liquidity Preference Fascist Regime
These keywords were added by machine and not by the authors. This process is experimental and the keywords may be updated as the learning algorithm improves.
This is a preview of subscription content, log in to check access.