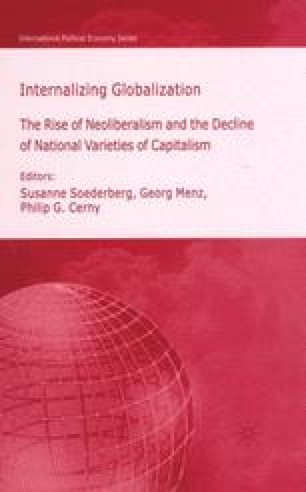 Globalization and the Internalization of Neoliberalism: the Genesis and Trajectory of Societal Restructuring in Chile

In approaching the debates over globalization, neoliberal hegemony and the ‘competition state’, the case of Chile is particularly instructive not least because far-reaching neoliberal reform long precedes the recent academic interest in globalization. Following the profound restructuring drive initiated under the dictatorial regime of Augusto Pinochet in the mid-1970s Chile has consistently been upheld as a pioneer in the application of neoliberal policies. The Chilean experience of neoliberalism, therefore, begins before the pivotal rise of Thatcherism and Reaganism in the centres of global capitalism, before the unrestrained global propagation of neoliberalism by international financial institutions, and before dramatic changes in the architecture of the international political economy that fashioned the extraordinary disciplinary power accredited to present-day transnational capitals. In other words, Chile began ‘internalising neoliberalism’ before globalization, as commonly applied, existed. This is not to suggest that the forces associated with globalization have not comprised increasingly pivotal moments in conditioning the actions of the Chilean state over the past two and a half decades. The global propagation of neoliberal policy ideals through various multilateral and national organizations alongside the coercion of economic relations imposed by relatively footloose transnational capitals are rightly understood to lie at the heart of the contemporary global political economy (see the introductory chapter to this volume for a systematic account of these debates).

Foreign Direct Investment Real Wage Capital Accumulation Foreign Capital Debt Crisis
These keywords were added by machine and not by the authors. This process is experimental and the keywords may be updated as the learning algorithm improves.
This is a preview of subscription content, log in to check access.