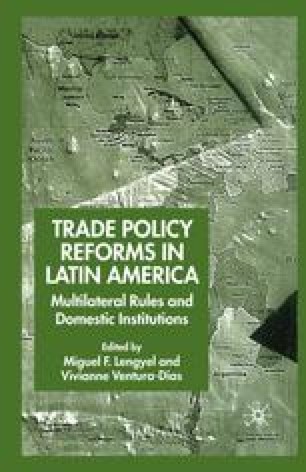 Chile is often cited as a successful case of an export-led economy in Latin America. The process of liberal reforms began with the military government in 1973 and continued throughout the following decades except during the financial crisis of 1982. After the democratization in 1990, the coalition of center-left parties (Concertation), which has ruled the country ever since, combined a low flat tariff structure with negotiations aiming at greater market access through bilateral free trade agreements. The strategy of ‘open regionalism’ was motivated by the need to diversify Chilean exports in terms of both product mix and final destination, and to attract new investments. At the end of the decade, the high concentration of Chilean exports in primary products, notwithstanding the continuing diversification progress since the second half of the 1980s, was associated with a decreasing rhythm of growth of the economy. The diversifying effort until the middle 1990s, also called the ‘second exporting stage’, faces an entirely different international context than the first period of export expansion. Fierce competition in international markets and the ongoing revolution in information and communication technologies pose disquieting challenges for Chilean policy-makers and entrepreneurs.

Foreign Direct Investment Trade Policy Trade Liberalization Market Access Business Association
These keywords were added by machine and not by the authors. This process is experimental and the keywords may be updated as the learning algorithm improves.
This is a preview of subscription content, log in to check access.