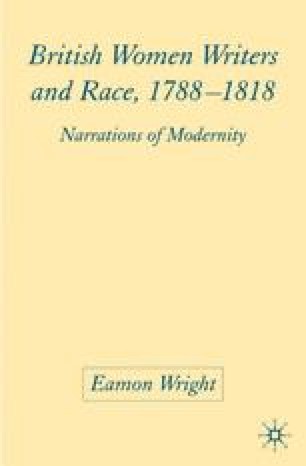 This book simultaneously contemplates and critiques the raciology of late eighteenth- and early nineteenth-century British women writers. In so doing it will unpack the ethical and ethnic moral-economy of the Romantic period.1 The primary subject of the work is the relationship between Enlightened Feminism, as feminism of the period has been called, and ideas of ‘race’ in the early Romantic period in Britain during the critical years of crisis and change, 1788–1818.2 The Romantic period was one of creative vibrancy, coupled with an attendant crisis and change of great velocity; the quantity and quality of literary intervention by women on the nature of the crisis facing the British polity — that is the pressures on the British nation, British civilization and British social, political and economic welfare — in an age of slavery, lends itself agreeably to an examination of the British feminist project of the late eighteenth century. What this book attempts to do is examine the manner in which both what British women writers said and how they said it, in poetry, novels, letters, memoirs, diaries and treatises were, at some point and in various ways, racially charged. This book is therefore a critique of British ethnic metaphysics.

Eighteenth Century Social Theory Literary History Early Nineteenth Century French Revolution
These keywords were added by machine and not by the authors. This process is experimental and the keywords may be updated as the learning algorithm improves.
This is a preview of subscription content, log in to check access.