Lord Hailey, the Colonial Office and the Politics of Race and Empire in the Second World War 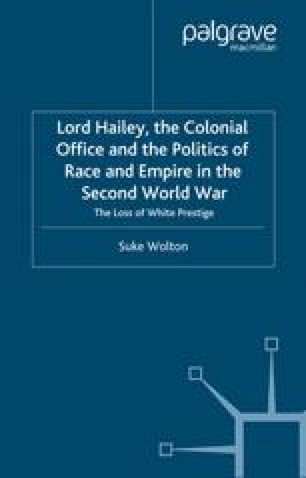 Lord Hailey, the Colonial Office and the Politics of Race and Empire in the Second World War pp 119-148 | Cite as

The British Colonial Office was sensitive to the need to fight an ideological battle for the Empire. Stressing Britain’s commitment to enhance rather than ‘exploit’ the colonies had become crucial after Roosevelt’s Four Freedom declaration. The idea that the Allies made up the ‘free’ world while the Axis powers ‘enslaved’ the others, did not quite square with the image of the British Empire especially within the United States. The Colonial Office tried to forge a new language to articulate their authority since the old expression had been discredited. It is not possible here to attempt to assess the influence of these ideas on actual administrative practice. The task here is to reconstruct the history of the ideas deployed to justify empire rather than the actual methods used.

Chinese Immigration British Government Colonial Administration Congress Party British Empire
These keywords were added by machine and not by the authors. This process is experimental and the keywords may be updated as the learning algorithm improves.
This is a preview of subscription content, log in to check access.