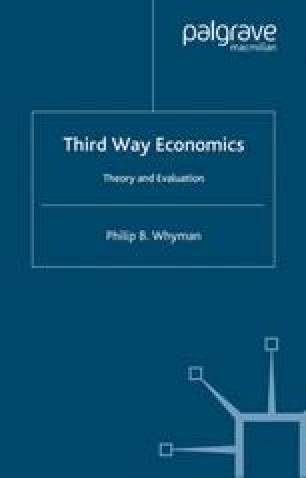 Thus far, this book has presented the policies, theoretical foundations and applications of Third Way economics, before evaluating the relative success of the approach in the previous chapter. The conclusion of this endeavour is that the Third Way represents an innovative response to globalisation and the rise of neo-liberalism that has been drawn upon, albeit to differing degrees, by a significant proportion of the progressive-social democratic movements in democratic industrialised nations. This economic programme has had a number of successes, primarily the ability to sustain simultaneously falling inflation and unemployment, temporarily stretching the period of economic expansion without recession, and the prominence given to supply-side reforms that invest in and empower people in competitive markets. However, Third Way economics is not without its critics. From the neo-liberal Right, the argument is made that the Third Way is a weak version of neo-liberalism and therefore it would be more optimum to have the ‘real thing’. From the Left, the criticism revolves around the fact that alternative policies and approaches to economic management exist, and the Third Way is almost as doctrinaire as neo-liberalism in its outright rejection of multiple alternate paths for economic development.

Exchange Rate Corporate Social Responsibility Monetary Policy Aggregate Demand Full Employment
These keywords were added by machine and not by the authors. This process is experimental and the keywords may be updated as the learning algorithm improves.
This is a preview of subscription content, log in to check access.