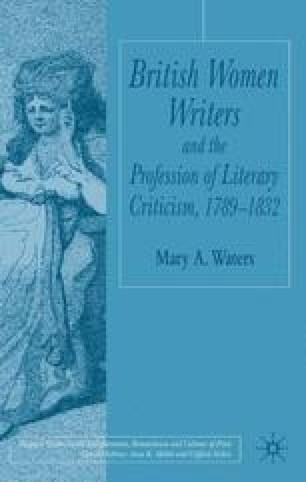 The Next Generation: Harriet Martineau’s Literary Reviews for the Monthly Repository

When Mary Wollstonecraft called herself “the first of a new genus,” she probably did not yet see the shape the new classification would take. Yet her metaphor fits in more ways than one. Not only did Wollstonecraft represent a departure from past limitations on women’s participation in the literary profession, but she exemplified a “first” that was soon followed by a “second” and a “third,” new members of the species emerging singly at first, but by the early 1830s, the period that traditionally marks the beginning of the Victorian age, in increasing numbers. In her introduction to a special issue of Victorian Periodicals Review devoted to women contributors, D. J. Trela affirms that from the 1830s onward, some time before George Eliot’s significant role in the Westminster Review, increasing numbers of women worked as editors and critics. Trela argues that while Eliot’s contribution has been used “to allege that it is only the exceptional woman who could break into and successfully dominate periodical literature and fiction, the scores of less prominent but nonetheless successful women who were able to earn a living writing and editing are more important in demonstrating a pattern that became more prominent as the Victorian age advanced.”1 The early reviewing of one of these women writers, Harriet Martineau, illuminates features of women’s participation in the culture of criticism between the end of Barbauld’s known reviewing and the first years of the Victorian era when the period of interest to Trela and her colleagues begins.

Political Economy Early Career Literary Work Literary Career Woman Writer
These keywords were added by machine and not by the authors. This process is experimental and the keywords may be updated as the learning algorithm improves.
This is a preview of subscription content, log in to check access.

Cite this chapter as:
Waters M.A. (2004) The Next Generation: Harriet Martineau’s Literary Reviews for the Monthly Repository. In: British Women Writers and the Profession of Literary Criticism, 1789–1832. Palgrave Studies in the Enlightenment, Romanticism and Cultures of Print. Palgrave Macmillan, London. https://doi.org/10.1057/9780230514515_6