Small Countries in a Global Economy 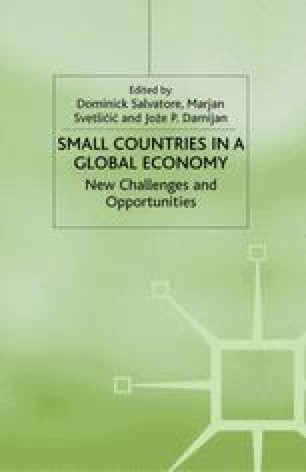 Discussions on country competitiveness have become widespread; however, country competitiveness means different things to different people. It is often used to mean the ability to sell more in foreign markets, a concept criticised by Krugman (1994:44) because its pursuit could lead to beggar-thy-neighbour policies and/or trade wars. Such a definition also contradicts the theory that all countries gain from international trade through comparative advantage, and it implies an acceptance of the mercantilist promotion of trade surpluses that was in vogue from about 1500 to 1800. We prefer to consider national competitiveness as a means to an end — the end being the well-being of the nation’s residents; however, we acknowledge that the measurement of well-being is fraught with difficulties, especially when predicting how the future will evolve (Daniels, 1991).

Foreign Direct Investment Small Country Trade Mark Large Country Import Substitution
These keywords were added by machine and not by the authors. This process is experimental and the keywords may be updated as the learning algorithm improves.