Ethics During and After the Holocaust 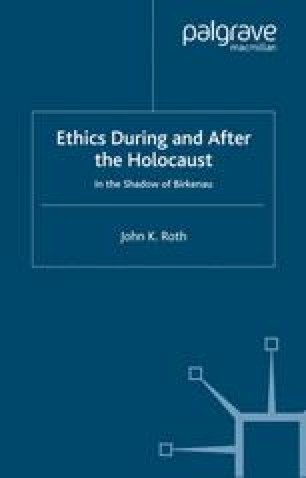 The Holocaust and the Common Good

As I worked on this book at the Center for Advanced Holocaust in the United States Holocaust Memorial Museum, the route to my office took me past the Washington Monument and then through an entry and corridors whose walls are inscribed with the words of an American idealism that stands in the sharpest contrast to the aims of Nazi Germany and the “Final Solution” of the so-called Jewish question, which marked so indelibly the aspirations of that genocidal regime. Those inscriptions include Thomas Jefferson’s July 4, 1776, affirmations in the Declaration of Independence: All men are created equal. There are inalienable human rights, including “life, liberty, and the pursuit of happiness.” They also include a September 27, 1979, statement by Jimmy Carter, the American president who appointed the Commission on the Holocaust that led to the building of the Holocaust Memorial Museum. “Out of our memory… of the Holocaust,” said Carter, “we must forge an unshakable oath with all civilized people that never again will the world… fail to act in time to prevent this terrible crime of genocide… We must harness the outrage of our memories to stamp out oppression wherever it exists. We must understand that human rights and human dignity are indivisible.”

Common Good American Dream Outrage Memory Moral Insight Jewish Refugee
These keywords were added by machine and not by the authors. This process is experimental and the keywords may be updated as the learning algorithm improves.

Adrienne Rich, An Atlas of the Difficult World