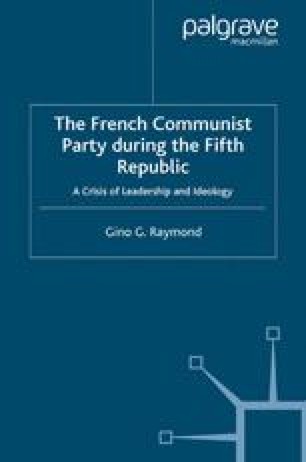 A Tale of Clashing Counter-cultures

In the previous chapter we analysed the way in which Marchais’ leadership discourse became introverted to the point of no longer being able to convince his own party members of its pertinence. In the current chapter we shall open up this theme to look more broadly at the relationship between the party and the national community whose belief in the mission of the PCF was in manifest decline. Whether it was the open challenge to the PCF of an erstwhile party functionary like Pierre Juquin, or the forlorn attempts to reform the party from the inside by distinguished but disenchanted members like Charles Fiterman (especially when faced with what they believed to be the failures of Georges Marchais’ leadership), their actions added to the evidence of a lack of synchronicity between the PCF and the society it aspired to change, and even between the party and the members it purported to serve. But the actions of Juquin and Fiterman marked the ultimate phase in a long-term process of change that pointed to the need for a reappraisal of the sense of identity and mission that lay at the heart of the PCF’s raison d’être. One of the original strengths of the party, certainly in the way it understood itself, had been as a refuge from the exploitation characteristic of capitalist society and the superstructure of oppressive values it generated. As a consequence, apart from the overthrow of that system, the defining mission of the party was to offer an alternative set of values around which to organise the collective existence of its members: a counter-culture.

Foreign Policy Communist Party Central Committee French Society Party Leadership
These keywords were added by machine and not by the authors. This process is experimental and the keywords may be updated as the learning algorithm improves.
This is a preview of subscription content, log in to check access.