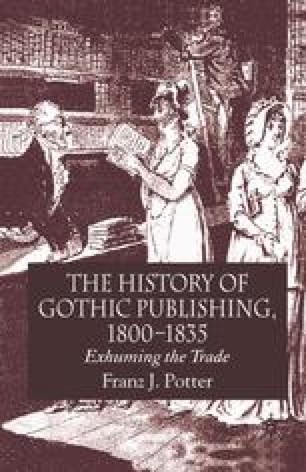 The Monster of Morality: Mary Shelley

On 17 June 1825, a small pamphlet simply titled ‘The Monster Made By Man’ was published in London by J. Mark and sold for twopence. Available in small and large circulating libraries, the short tale was embellished with a spirited cut illustrating the moment of animation of a monster in a cave laboratory. The illustration shows an assistant, Frantz, on one side of a creature, and scientist, Wallberg at the moment the creature first raises itself from the rude bed, opening and displaying its horrid eyes. Human remains are scattered in the foreground, a broken vessel lies in the centre at the creature’s feet representing the elixir of life, machinery and instruments set behind the assistant denote the impious actions of creation. Frantz is horror-struck, hands clasped, while Wallberg, arm outstretched, distances his self from his creation. The simple illustration underscores the narrative’s central theme: the punishment of presumption.

Human Remains Moral Courage Anonymous Author Break Vessel Literary Reputation
These keywords were added by machine and not by the authors. This process is experimental and the keywords may be updated as the learning algorithm improves.

This is, perhaps, the foulest Toadstool that has yet sprung up from the reeking dunghill of the present time.