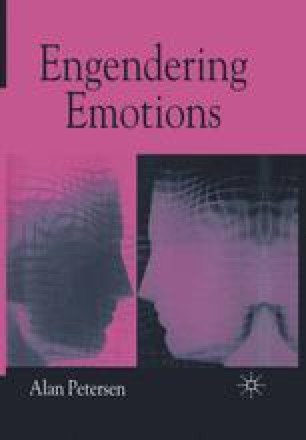 As noted, psychology has been a key discipline in the study of sex or gender differences in emotional experience and expression. An entire sub-field of psychology has in fact been devoted to the study and measurement of such differences. The psychology of sex/gender differences is often seen to begin with the publication of Maccoby and Jacklin’s The Psychology of Sex Differences (1974). However, psychological research on gender differences can be traced back further, to the late nineteenth century and the origins of psychology itself (Hyde and Mezulis, 2001: 552). Debates since then have focused centrally on the issue of whether or not noted differences are ‘significant’, usually meant in a statistical sense. The question of ‘significance’ is difficult to resolve since this is ultimately a question of one’s values and commitment to particular perspectives and methods. In the same way as ‘intelligence’ is a product of intelligence tests, ‘difference’ is an artefact of the particular theories and methods adopted. Despite efforts to produce value-free accounts of difference, it is not possible for researchers to set aside their values, which will influence their conception of ‘difference’ and their interpretation of its ‘significance’. Assumptions about ‘essential’ differences are deeply entrenched in the history and the theories and practices of the discipline of psychology.

Evolutionary Psychology Natural Difference Display Rule Social Constructionist Approach Emotional Display Rule
These keywords were added by machine and not by the authors. This process is experimental and the keywords may be updated as the learning algorithm improves.
This is a preview of subscription content, log in to check access.