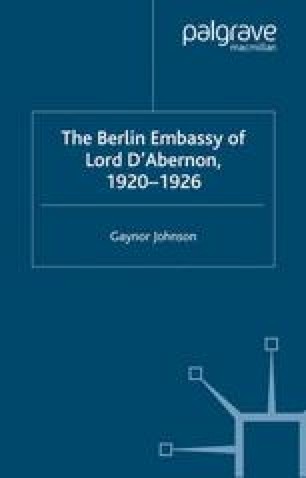 Hitherto, Britain’s relationship with Germany in the 1920s has proved less appealing to scholars than the more momentous events of the 1930s. In some ways, it is easy to see why this is the case. The 1930s were dominated by disarmament debates and the appeasement of a larger-than-life fascist dictator pursuing an eccentric, dangerous nationalist foreign policy culminating in the outbreak of the Second World War. The preceding decade, at least at first glance, seems to lack drama on this scale. It was an era dominated by national introspection, of reconstruction and reflection, after the horror of what was known until 1939 as the Great War. During the 1920s, the forms of nationalism that were most likely to result in war were on the horizon but largely remained there. Why then should Anglo-German relations in the 1920s be studied? The most obvious answer is as a background or introduction to the events of the 1930s. Yet such an approach fails to do the period full justice. Throughout the 1920s, Anglo-German diplomacy had its own dynamics. It was an era of hope. Many felt that war as a means of solving international problems could be banished forever. Some believed that the Germans would one day be re-integrated into European diplomatic affairs, and both Britain and Germany experienced a period of economic and social stability for at least part of the decade.

Foreign Policy British Government German Government European Security European History
These keywords were added by machine and not by the authors. This process is experimental and the keywords may be updated as the learning algorithm improves.
This is a preview of subscription content, log in to check access.