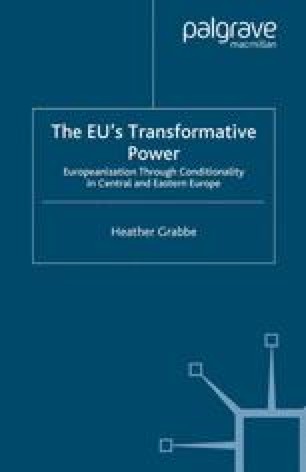 Movement of Persons under Schengen

This case-study concerns the policy area of regulating movement of persons across the external frontiers of the Union, which comprised the Schengen acquis contained within negotiating chapter 24 on justice and home affairs. This policy area was presented relatively late in the accession process, but it was high on the political agenda in both the EU and CEE. It did not appear in the first phases of accession policy, and received little attention in the Commission’s 1997 Opinions, but it became an increasingly important area from 1998 onwards in the Accession Partnerships and in EU aid policy, including twinning.

Organise Crime Border Control Candidate Country Home Affair Visa Requirement
These keywords were added by machine and not by the authors. This process is experimental and the keywords may be updated as the learning algorithm improves.

Research for this chapter began during the author’s visiting fellowship at the Western European Union Institute for Security Studies in 1999. Initial findings were published in Grabbe 2000a and 2000b.