War and Liberation in France 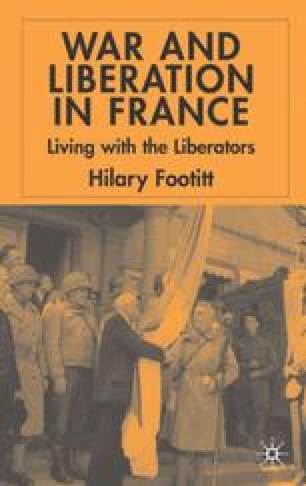 Liberation on the Move: Normandy

The first Liberation meetings between Allied personnel and French men and women took place in northern France. It was here that Operation Overlord was launched on 6 June 1944, with the Allied 21st Army Group mounting their assault on the beaches in the east of Normandy, near Sainte-Mère-Eglise (Utah Beach), further west near Pointe du Hoc (Omaha), at Arromanches (Gold), Courseulles (Juno), and Lion-sur-Mer (Sword). Once ashore, however, after fighting which was in many cases bloody and extremely costly, actual progress on the ground went more slowly than had been expected. By the second half of June, positions on both sides of the bridgehead that the Allies had established in France seemed to be solid. The American army, turning westwards, was halted in its drive to Saint-Lô. Despite attempts to outflank Caen from the west, the city was still in German hands at the end of June, with British and Canadian soldiers fighting their way up to the River Orne only in early July, in the wake of immense Allied bombing raids. In this situation, the bridgehead of land that the Allies secured was becoming increasingly cramped, and there were still more American divisions in England waiting to land.

Civilian Population French Woman French People Military Objective Ally Force
These keywords were added by machine and not by the authors. This process is experimental and the keywords may be updated as the learning algorithm improves.
This is a preview of subscription content, log in to check access.